The Police Crime Prevention Academy’s Amanda Mulholland, received a commendation for her services to crime prevention and designing out crime at an Awards Night held by Secured by Design (SBD), the national police crime prevention initiative.

Amanda, who is the Learning and Development Manager for the Academy, received her certificate at SBD’s ATLAS national training event attended by nearly 200 Designing Out Crime Officers (DOCOs) from every police force in the UK – 43 in England and Wales as well as Police Scotland and the Police Service of Northern Ireland.

Amanda’s practitioner experience is rooted in community safety and partnership working within local councils in England and Northern Ireland over 25 years. Her occupational competence in training development and delivery includes five years as a course director at the Home Office Crime Prevention Centre, developing and delivering new community safety qualifications in Northern Ireland and on-going CPD. Amanda's qualifications currently include a Certificate in Training Practice, and the D32/33 assessor award updated to the A1 assessor Award in 2019. She is an Associate Member of the Chartered Institute of Personnel and Development (CIPD).

Guy Collyer, Head of the Academy, said: “Hard work, innovation and dedication should always be rewarded, and Amanda has demonstrated this like no other person who I have worked with. This commendation is long overdue and I am very pleased for her.” 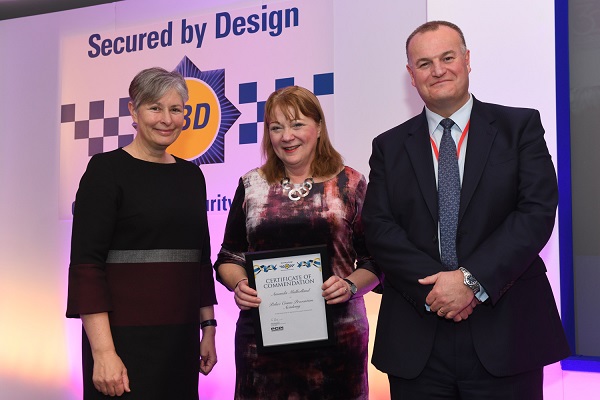 Amanda said of her award: “Joining the Academy and becoming part of the wider PCPI family in February 2018 has enabled me to get back to the buzz of developing and delivering quality training and events whilst allowing me the privilege of working with police and partnership colleagues who provide such a professional service to our communities. But it’s very much a team effort and I’m delighted to accept the commendation on behalf of the Academy team.”
The ATLAS training event gives DOCOs the opportunity to hear from keynote speakers, who included Martin Hewitt, Chair of the National Police Chiefs’ Council, attend learning and development workshops, and to see the latest security products from SBD’s member companies.

The Academy maintains close working links with the National Police Chiefs’ Council (NPCC), as well as senior police officers from across the UK, and is the established supplier to the police service for crime prevention learning & development. As part of PCPI, the Academy is affiliated with the Secured by Design initiative, so is the leading expert in delivering SBD standards and guidance.

The Academy has been delivering the nationally recognised generation of ProQual approved and OFQUAL accredited qualifications in crime prevention and designing out crime since September 2018, with its links to the Police Service ensuring that the qualifications are constantly adapted to keep pace with changing patterns of criminal behaviour.

In addition to being the established supplier of police training, the Academy also delivers a number of qualifications to the private sector and works closely with local authorities and relevant specialists such as architects and planners.

The Academy is an APSE Approved Partner and provides the RIBA approved presentation as part of the recognised CPD for architects.

Further information about the range of accredited qualifications offered by the Academy can be obtained by visiting https://www.crimepreventionacademy.com/ or emailing: